Truck tire service is in our name, but as it turns out, most of the time, trucks don’t load themselves! That’s where our baby A2 truck comes in – not to load trucks, but to keep loaders from being non-op because of tires. The baby A2’s power take-off system allows the truck’s engine to actuate a hook-arm with thousands of pounds of force, which comes in handy when working on off-road tires that can weigh as much as 2000lbs.

In addition to the right truck, you got to have a skilled operator. One such operator is McCoy’s own Johnny L. Johnny was recently dispatched to fix a flat on a customer’s front-end loader. Johnny was on site and had the machine back up and running in less than one hour.

The tires on this work machine can carry over 20,000lbs when inflated to 65psi. With its massive 6 and ½ yard bucket the loader can fill an 18-wheeler to capacity in just 4 scoops. The machine had a flat on its left front, which meant Johnny could leave his jack in his truck, and instead, the loader operator simply hoisted the loader’s front axle off the ground with loader’s own hydraulics.

Johnny brought plenty of soapy water and was able to locate the tire’s leak while it was still mounted on the machine. Then, after deflating the tire and wheel, he used his truck’s A2 to hold the sidewall of the 23.5R25 away from the lock-ring and lock ring keeper. With the multiple years of off-road tire work he has, he made removing the lock rings with the hammer and pry-bars look very easy. Then, he wrapped the large tread lugs with a butterfly-shaped steel cable and used his A2 to pull the tire and bead ring off the wheel which was still mounted to the loader. Expertly using the A2 to pin down the massive radial tire and ensure that it would neither roll or fall over, he buffed out the patch area and applied a smelly chemical-cure patch cement. As the cement dried he used a small pneumatic rotary tool to clean dirt and rust off the machine’s wheel. He then applied special tire product called “vegi-soap” to the tire bead and the wheel. With the patch installed he stood clear of the large tire and mounted a special tire-bead-hook on the actuator. The tire bead hook allows him to tilt the massive tire over with the A2 before picking it up off the ground. The tire is then set on the wheel and pushed into place with the A2, which he operated as if it were attached to his person. With the “o” ring, lock-ring, and keeper all properly reinstalled, he re-inflates the tire while mounted to the vehicle. 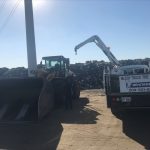 Loader hoists up its front axle 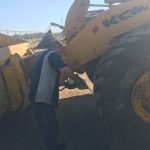 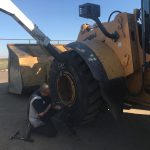 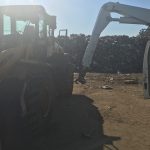 A butterfly lasso pulls the tire off the loader 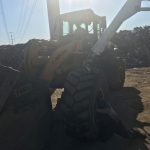 The A2 holds the tire in place 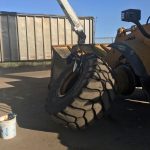 The tire bead hook holds the tire without damaging the bead